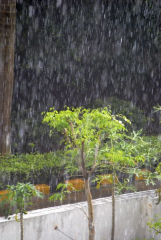 When I arrived in Haikou a year ago my only experience with a tropical region has been 6 month on Martinique between my studies in physics and the start of my computer science studies. On Martinique the rainy season is about 3 month and the rest of the year there is more or less sunshine.

The September in Haikou last year has been nice even though it was quite warm with around 38°C. In October the Taifun season began and I can tell you that we got drown in our apartment in the fourth floor. The wind pressed the gigantic amount of water which has been carried along with the Taifun directly through the windows into the apartment. This rainy period continued more or less until mid December. The rest of December and January have been dry but unusual cold, specially because there is no heating in the apartment.

In February it started to rain again. First only sometimes and after a while more and more. Since two month now we have temperatures above 30°C and about one thunderstorm every day. The record has been three thunderstorms in a row during one afternoon. When you are outside in such a storm, there is no protection. When you wear a slicker you are wet from your own sweat, otherwise from the rain. The water in the road can easily raise to a torrent of more than 10cm depth. There is no sewer which can take that much water in such a short time even though the city of Haikou is cleaning them all the time. A gaze through the window shows me grey in grey during such a storm and I can hardly see the neighbour building which is only about 30m away.

I never imagined that on a tropical island like Hainan it could be more rainy than in northern Germany where I come from and which I once left because of the “bad weather”. I think life is really funny and we should enjoy this fact much more ! 😉

This entry was posted in Around the World, China and tagged China, Haikou, summer. Bookmark the permalink.