In 2008 we made a tour to the famous old towns Dali and Lijiang in the Yunnan province in the northwest of China. 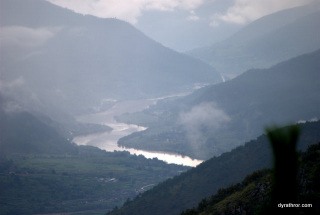 While visiting Lijiang we took the opportunity to make a trip to the famous Tiger Leaping Gorge of the Yangtse River which is about 60km from Lijiang. The gorge is a narrow gap of about 25m width in the valley between the Jade Dragon Snow Mountain and the Haba Xueshan which has to be passed by the Yangtse River.

Together with some other visitors from our hotel we chartered a driver with a small van who brought us to the begin of the trail along the river. On our way we had the opportunity to take some pictures of the Yangtse from above during a gap in the clouds who accompanied us in the morning.

The path along the river is well maintained and flat and is said to be around 12km long with a dead end at the gorge. Parts of the path are dangerous because of possible rockfall and frequently you are asked to walk more on the mountain side. 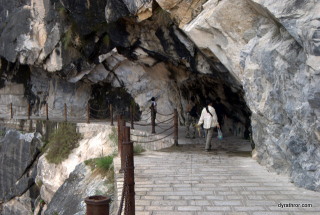 The weeks before our visit have been very rainy so that the Yangtse water was yellow brown and the river was fast running carrying a lot of water.

Sometimes the path was cut through the mountain because the old path along the river has become too dangerous and was closed now. We could even see some huge boulders lying on these parts. 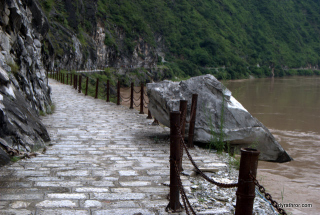 Finally arrived at the gorge we could enjoy a spectacular view of raging water rushing through the gorge as if it was boiling. There was so much thunder that even the ground was trembling below our feet. 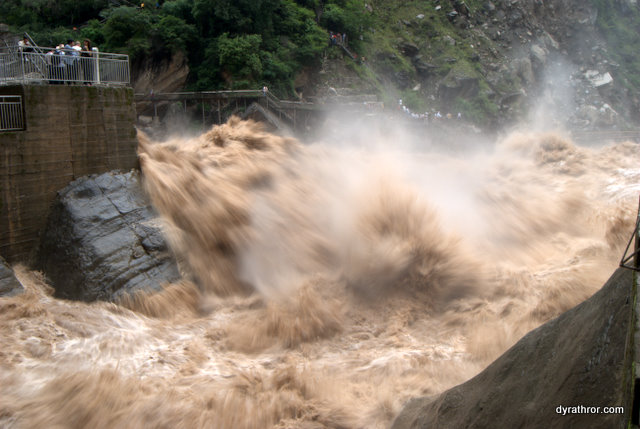 This view really was worth the trip 🙂

It is said that the name come from a tiger which escaped his hunters by a jump over the gorge. At the time we visited the gorge the poor tiger would probably have been cought by the hunters. The next image shows you the “normal” flowing Yangtse through the Tiger Leaping Gorge. 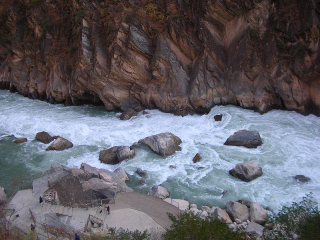 I copied this picture from Wikipedia where you can get more information about the Tiger Leaping Gorge.

On this picture you can see some huge boulders lying in the riverbed which might have been used by the tiger to cross the river. There are no visible boulders on my pictures. 😉

This entry was posted in Around the World, China and tagged China, Lijiang, Tiger Leaping Gorge. Bookmark the permalink.